Wings to the Kingdom (Eden Moore #2) 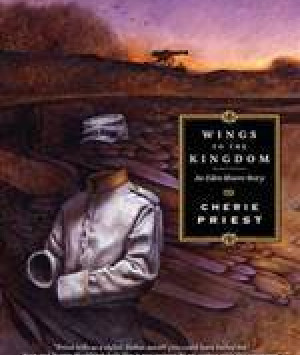 Wings to the Kingdom

The fields at Chickamauga, Georgia--America's oldest national military park--claimed 35,000 casualties during the Civil War. Any good guide will tell you that the grounds are haunted. The battlefield even has its own resident haunt, called Old Green Eyes for his tell-tale luminous gaze. It has long been said that Old Green Eyes intends no harm to those who respect the park. He is no menace, but a guardian of the dead. While he walks, the dead may sleep secure in the knowledge that their rest will be undisturbed. While Old Green Eyes patrols the battlefield, there is nothing to fear, for graves are not robbed and bones are not moved.

But suddenly a different phenomenon starts puzzling and frightening visitors, causing tours to be canceled and rangers to quit their jobs. These new ghosts are no illusions carved out of the low-rolling fog. One by one, the solemn-faced spirits in ragged uniforms show themselves, and one by one, they point a determined arm off into the distance. Why do the soldiers march again, and what has become of their unblinking custodian? The spirits need a go-between, someone who can speak to them, and for them.

But the ghosts aren't taking no for an answer.

You're reading Wings to the Kingdom (Eden Moore #2) novel online free on NiceNovel.com !