Melt into You (Loving On The Edge #2) 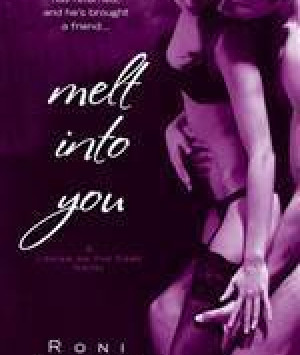 Her first love has returned, and he's brought a friend...

After running away from home and the boy who broke her heart, Evan Kennedy has kick-started the perfect new life with her celebrity fiancé. So what if said fiancé prefers guys? She knew the deal when they got engaged. And with her ticket to The Ranch, an exclusive resort where any fantasy can be satisfied, she can find someone to fulfill her less-than-traditional desires on the side.

She just never expected that man to be Jace Austin, her old heart-breaker—all grown up, hard-bodied, and holding out a collar. She knows it’s a world-class bad idea—especially since Jace has brought along his buddy Andre, who’s every bit as irresistible. But if they can stick to the no-strings rules, so can she.

Too bad Jace has never been so good with rules. Evan is convinced “forever” is a word used only in greeting cards, but Jace and Andre have one last fantasy of hers left to fulfill. It’s time to go big or go home. And neither man has ever been a fan of going home.