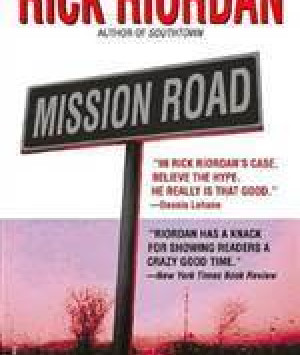 The triple-crown winner of mystery's most prestigious awards-the Edgar, the Anthony, and the Shamus-Rick Riordan blasted onto the crime scene with one of its freshest and most intriguing protagonists, Tres Navarre. In Mission Road, Navarre returns in a wrenching crime drama in which he must revisit the sins of the past to catch a killer about to get away with murder...again.

San Antonio private investigator Tres Navarre is used to working on the edge-that razor-sharp line between legal and life sentence. But this time he's stepped straight into a no-man's-land. When an old friend appears at his door spattered with blood and wanted for attempted homicide, Tres doesn't have to think twice about where his loyalty lies-or the consequences.

Ralph Arguello is a criminal who put the street life behind him when he married SAPD detective Ana DeLeon. Now Ana's been gunned down and her fellow cops don't need to look far to find a prime suspect. For Ana recently reopened the most infamous cold case in SAPD history-the unsolved murder on notorious Mission Road eighteen years before that threw the San Antonio underworld into bloody chaos. Ana was about to bring charges against the suspected killer: her husband, Ralph Arguello.Tres is sure that Ralph didn't do it-and that he didn't shoot his wife. But with the police and the Mafia both out for revenge, there's no one to turn to for help.

Now, armed and dangerous, the targets of a citywide manhunt, Tres and Ralph have just hours to discover what really happened on Mission Road almost two decades ago. To find the truth, they must set a collision course with the past-and with a secret that will tear their lives apart.