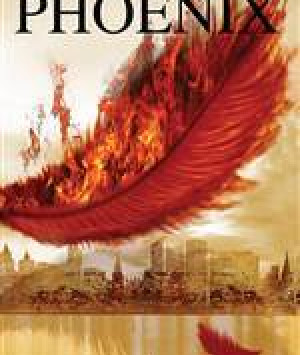 Ash and Natalie are just starting to build a life together when things in the United Sentry States go from bad to worse. Ash and Natalie find themselves at the center of turmoil when dictator Purian Rose threatens Natalie’s life unless Ash votes in favor of Rose’s Law—a law that will send Darklings and other dissenters to a deadly concentration camp known as the Tenth.

When Ash can’t bring himself to trade Natalie’s life for those of millions of Darklings, her fate is sealed. Enter Elijah Theroux, the handsome Bastet boy Natalie once saved from her mother’s labs, where he’d been experimented on and tortured. It was his venom the Sentry used to create the lethal Golden Haze, the heart of the government conspiracy that led to Black City’s uprising and Ash’s rebirth as the Phoenix, the face of the rebellion. Elijah is back and Ash doesn’t like him; it’s clear he’s taken with Natalie, and Ash fears she may have feelings for him as well.

But Elijah also may have the answer to taking down Purian Rose for good—a powerful weapon called the Ora. Ash, Natalie and Elijah just have to escape Black City undetected to find it. But fleeing the city and finding this weapon (if it even exists) are easier said than done, and the quest could tear Ash and Natalie apart, even pushing them into the arms of others.

This enthralling sequel to Black City is just as absorbing, delicious and steamy as the first book, leaving readers hungry for the series conclusion.