Den of Sorrows (The Grey Wolves #9) 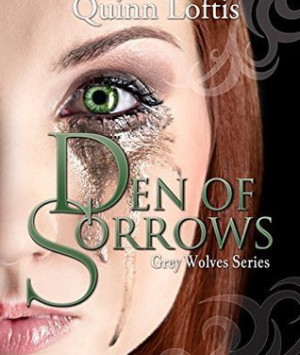 The Romanian and Serbian Canis lupus rest in an uneasy peace. One of their own, Sally Miklos, the young and powerful gypsy healer, aids Perizada in her quest to defeat Volcan, a long forgotten nightmare returned to our world. These two packs watch as their brothers across the world, wolves from Spain, Ireland, and America, join their own forces in the battle against the evil dark fae. At the same time, the packs hope against hope that their presence might reveal a mate bond between a pack member and one of the five recently discovered gypsy healers.
While Jacque and Jen miss Sally, their longtime best friend, they have bided their time dealing with their own domestic issues. Jacque and Fane are anticipating the birth of their first child and Jen and Decebel face the challenges of caring for an infant. Both girls are eagerly awaiting Sally’s return, and have Perizada’s word that she will be back in time for the birth of Jacque’s baby.
Vasile and Alina, the Alpha pair of the Romanian pack, are enjoying this time of peace. But Vasile did not become the most powerful Alpha in centuries by being a fool. He has lived long enough to know that there is always another battle on the horizon. As long as evil exists in this world, his race must step forward and stand in the gap, shielding those who cannot protect themselves. But the battle he is anticipating is bigger than he could have ever imagined.
As Perizada has recently discovered, creatures of the night that have for so long remained hidden from the human realm, have slithered from their underground lairs and begun preying on the young and innocent. The high fae has declared war, and she expects Vasile and his wolves to be the ones to carry out the attack. The Alpha is more than happy to oblige. But with his first grandchild on the way, and the gift of five vulnerable healers coming under the wolves’ protection, he understands that he must be very careful not to place any of them in harm’s way.
Such is the job of the Alpha, protector, and provider. He and those he leads must stand as sentinels and warriors to safeguard those they love, and the humans who know nothing of the supernatural world. It will be their job to destroy the creatures that threaten to expose them all. And if they fail, the world as they know it, both human and supernatural, will never be the same.