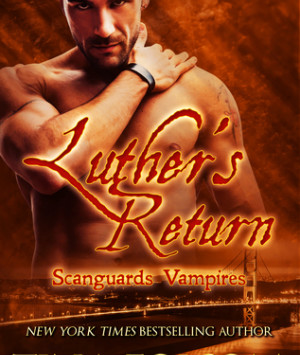 After twenty years incarcerated in a vampire prison, Luther is finally free. But before he can close this chapter of his life once and for all, a kidnapping thrusts him back into the world of Scanguards and into a confrontation with the vampires whose mates he very nearly killed two decades earlier.

Actress Kimberly “Katie” Fairfax has turned her back on Hollywood and now teaches drama at a college in San Francisco. When Scanguards owner Samson’s daughter disappears during a performance, Katie blames herself, because she inadvertently put Isabelle in the path of danger. Realizing that Luther may be the only one who can rescue Samson’s daughter, she forges a tenuous alliance with the inscrutable stranger. As passion ignites between them, they not only have to fight against the unknown foe, but also against the darkness within themselves that could destroy them before they can rescue Isabelle.